The Skeleton and The Skin

Annet Couwenberg is a fiber artist whose art work is based on the concept of clothing as a metaphor for examining the precarious balance between the body/skeleton and the outer membrane/skin.

Annet and Lynne worked together during the summer of 2014 for a unique Fellowship experience studying the Division of Fishes’ collections through the lenses of both art and science.

Annet Couwenberg’s Puff #2, made of laser cut buckram and wood

Last week I got an email with this description from my fiber arts guild email list. Gosh, it was right up my alley. I had to go. So, I traipsed into DC, ice and puddles notwithstanding, and listened to what they had to say.

Couwenberg has no formal science education (beyond your usual secondary ed, I assume). She’s got two degrees in fiber and a background in fashion design, but has long been interested in the relationship between the skeleton and the skin. We saw corset inspired art, for instance. But listening to her talk about her fellowship at the Smithsonian was great.

She really dove into the rich source material on so many levels. Not only was she inspired by how the fish looked, but she was looking at histograms (slides of tissue) and manipulating those and then creating art based on those.

Couwenberg works with a variety of materials. I was particularly taken with her laser cut pieces. Some pieces are lacey, others are stacked (layers and layers (HEY NEURO PEEPS, think about this for those stacked images you guys get — juicy stuff, am I right?)).

Origami is a rich source of inspiration for her too. She had all this folded buckram which was pretty neat (laser cut dots to help with the folds!). And yet, she holds she’s not a sculptor but a fiber artist.

I was struck by a couple thing she talked about. At least twice she talked about how it’s about the process for her. This is how she learns. Finally, someone else like me! I asked her if she could have learned science in this way, might she have been a scientist? She agreed it might have happened.

Someone asked if the technology allowed her to do things she wouldn’t be able to do otherwise. Her answer was interesting to me because she talked about how it didn’t make things easier, but I also have to wonder, if like me, she’s drawn to trying new techniques to help create her art, seeing the possibilities in them.

Dr Lynn Parenti was her science partner and this woman studies fish. I asked at one point if the difference between a scientist and an artist was that the scientist takes things apart while the artist makes things. I think fundamentally, at least in the sciart community, a lot of us are asking the same questions, but approaching from a different viewpoint. The goal is still to learn and communicate and educate.

It seems what Parenti got out of the partnership was the idea to take slides of a coelacanth brain and 3D image it!! How cool is that?

Finally, someone else asked Couwenberg if she thought about working with exoskeletons and exploring that relationship. The answer? She was just starting to do that!

Very exciting work. I’m so glad I went. So, what do you think? Would love to chat about it. 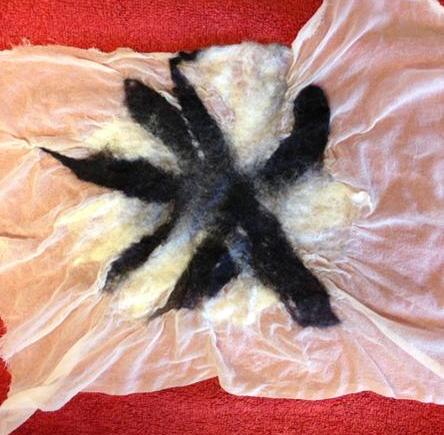 My phrase for this year is “letting go of fear”. I’m afraid of a lot of things. Most of them are quite silly. One of the reasons I love science is that it is all about facts. I find it very comforting to look at statistics, for instance. And I also love the spirit of investigation.

Last May I saw my first nuno felted scarf. I had no idea what it was, but I fell in love. I wanted to know how to do that thing.  In December, I met a woman who agreed to teach me and two weeks ago, she did indeed teach me. I took home four samples. It was so much fun.

My life, with two kids with activity plus my own interests, is busy. I haven’t had the mental space or time to do something new, but I was starting to feel the pressure build. Use it or lose it. I went to two different yarn stores and bought supplies and today, I dove in. I let go of expectations and just tried, encouraging myself as best I could.

I am thinking this may be the chaotic, organic process my work needs. It’s messy, but easy to clean up, and unlike stitching with a machine, you lose a lot of control (over the shape of things). I love the textures you achieve in nuno felting.

I have no idea what I’m going to do with these pieces. They are experiments, but they are also building blocks.  Every time I can sidestep fear, it’s a good moment.

Dolphins frolicking in the water under a sliver of a moon.

Turns out the quilt just needed a little moon and voila, it is ready for show time! I had thought I was going to add a bunch more stuff, but after talking with a variety of people, got the idea that the only thing missing to make it a perfect visit to the beach was the moon. 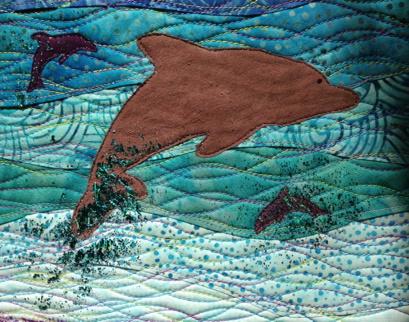 Now that January has come and gone, I am hoping that the schedule will more amenable to some quality studio time again. On that note, I am posting a couple teaser pictures, which I posted earlier today, from a WIP.

This little quilt is about 12X 17 inches and is part of a group challenge. The pathway (mine is seaweed) connects all seven little quilts. It starts in the forest and ends at the beach. We were tasked with using two techniques we’ve explored in our group since we started. I have used paint and foil (so far), but have also incorporated some techniques I learned or taught myself since last year as well.  The curved piecing is courtesy of Karen Eckmeier, and the little tulle tube that encloses the sea shells is similar to something I did on the Blood Brain Barrier quilt I made last year.

Dolphins leaping in the waves. Stitched down with metallic thread and embellished with foil.

Real sea shells on fake (fabric) seaweed. Contained by tulle and then sewed down with a free motion quilting meander to make individual pockets for each shell.

When mine is done, and everyone else’s too, I will do a blog post that shows all seven together.